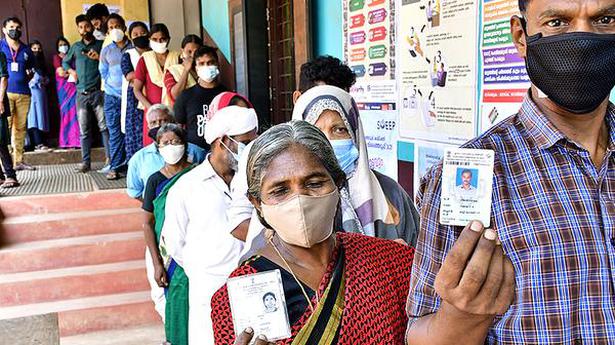 More than 74 per cent of the 33.21 lakh voters in the district exercised their franchise to elect 16 members to the Assembly on Tuesday. In the Malappuram Lok Sabha by-election too, 74.53 per cent voters polled their votes.

Brisk polling was reported from throughout the district quickly after voting began at 7 a.m. Election officers began the polling course of with a mock polling at 5.30 a.m. Some defective machines had to get replaced after the mock polling. However, in some cubicles defective voting machines precipitated delays.

Indian Union Muslim League Malappuram district president Sayed Sadikali Shihab Thangal, who was the primary voter at sales space No. 95 at CKMLP School, Panakkad, needed to wait till the machine was repaired.

The snag was detected after election officers utilized the voter ink on Mr. Thangal’s finger.

Polling continued past 7 p.m. at a number of cubicles in the district.

As many as 4,875 polling stations had been arrange by together with 2,122 auxiliary cubicles in view of the COVID-19 pandemic.

As many as 105 cubicles having Maoist risk had particular safety. There had been 194 vital cubicles in 76 places throughout the district. Nine weak cubicles had been recognized in two places. Live webcasting facility was organized in 2,100 cubicles, and full-time video recording in 86 cubicles.

Tags: 74% polling in Malappuram
No Result
View All Result