At 105, Marappa Gounder walks to cast his vote 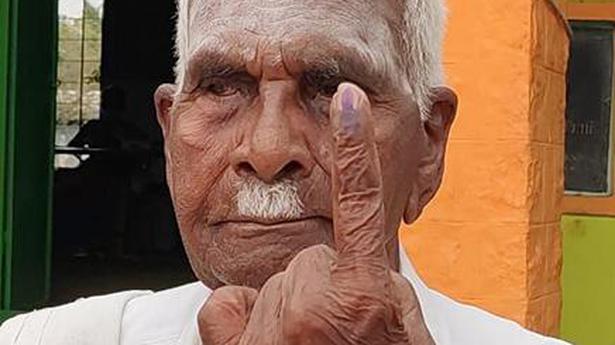 At 105, Marappa Gounder walks to cast his vote

When election officers visited the home of 105-year-old K. Marappa Gounder in Karupparayanpalayam close to Coimbatore to hand out the consent kind for postal voting, he refused.

On Tuesday, the centenarian walked to the Corporation Elementary School in Karupparayanpalayam, round 300 m from his home, and cast his vote.

According to Mr. Gounder, this has been the observe each election, and this didn’t change this time as properly.

“He informed election officials that he wanted to cast his vote at the polling station,” mentioned his son M. Soundararaj.

According to Mr. Gounder, a farmer, he has cast votes in each election since 1952.

He was born on June 1, 1916, and his start particulars had been recorded by his dad and mom on a palm leaf engraving.

The seniormost voter on the polling station additionally acquired a particular welcome — the presiding officer launched him to employees on election responsibility. Some of them acquired blessings from the centenarian earlier than he left the station. “Cast your votes for those who do good things for society,” Mr. Gounder advised journalists, when requested what his message was to voters.