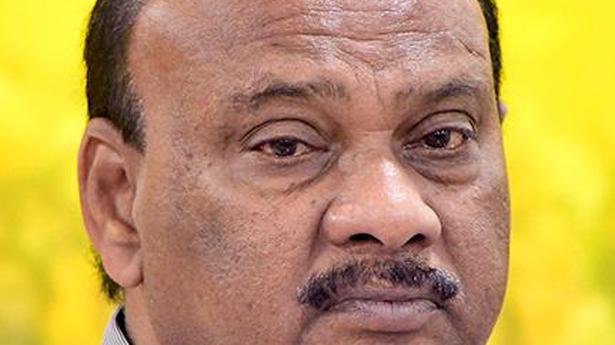 TDP veteran and former Minister Ch. Ayyanna Patrudu on Thursday appealed to the people and leaders of north Andhra to oppose the sale of authorities lands on Beach Road within the metropolis.

In a video message on Thursday, Mr. Ayyanna Patrudu expressed concern on the ‘nonchalant reaction’ of the people and ruling social gathering leaders of the area to the issuance of tenders by the YSR Congress authorities for public sale of invaluable authorities lands.

“This would come in the way of undertaking development activities in future and deprive future generations of development,” he mentioned.

The former Minister alleged that whereas town of Vizag was being put up for sale, there appeared to be hardly any public outcry over the state of affairs. He alleged {that a} ruling social gathering chief has grabbed a big chunk of personal land, Simhachalam (Mansas) land and Prema Samajam land.

He additionally alleged that the federal government is supporting the proposed sale of land belonging to Visakhapatnam Steel Plant (VSP).

The lands proposed to be bought alongside the Beach Road at 18 completely different locations, unfold over 17 acres, would rake in about ₹1,500 crore to the State exchequer. The lands have been being bought to fill the empty coffers of the State because the Chief Minister couldn’t assume of another means to fund his welfare programmes, he mentioned.

Mr. Ayyanna Patrudu mentioned that neither the people of the area nor the Ministers and MLAs from the area have been eager on taking the problems to the discover of the Chief Minister. Similarly, the privatisation of VSP would hurt the pursuits of lakhs of people of north Andhra. He lamented that the people of the area voted for the YSR Congress Party within the native physique polls regardless of realizing absolutely nicely the function of the ruling social gathering behind the VSP privatisation transfer.