For this group, casting vote is a compulsive habit 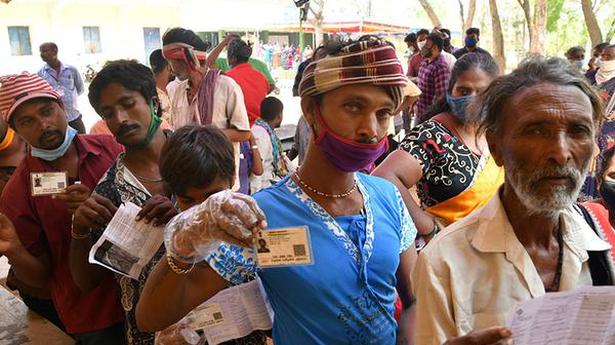 For this group, casting vote is a compulsive habit

For 18-year-old R.Ranjitha, from the Narikurava group, making use of the indelible ink in her finger and casting vote for the primary time was an thrilling expertise. She hopes that the one that involves energy will do good for her group.

There are greater than 1,000 Narikuravas residing in Gandhi Nagar, Agaramcheri, Ambur constituency in Tirupattur district. Out of this, there are 260 voters.

Members of the group claimed that there have been 46 first-time voters amongst them. “I don’t know much about politics but I wanted to exercise my democratic right. I hope the candidate I chose would win and do good for the constituency, especially for us,” Ms.Ranjitha mentioned.

Members of this group, who’ve been residing in Gandhi Nagar, for previous many many years, have by no means did not vote.

“We come as a group to vote. Nearly four decades ago, we wanted to boycott elections as our demands were not met. But we didn’t do it and voted,” mentioned S.Anandan, an aged member of the group.

D. Rajini, one of many leaders of the group, residing in Agaramcheri, mentioned a assembly was held among the many members a week earlier than the election, and it was determined that everybody ought to vote. “We analyse what each candidate has promised for the development of our community and we decide whom to vote for,” he mentioned.

Mr. Rajini mentioned that they want correct homes and good consuming water provide. He mentioned that in Chief Minister K. Kamaraj’s regime they got 65 acres of land.

“But it was grabbed by different people. I advise youngsters that it is important to vote to choose the leader who can bring a change in the society. I want the mentality among our community members towards education of our children, especially girls, to change,” he mentioned.