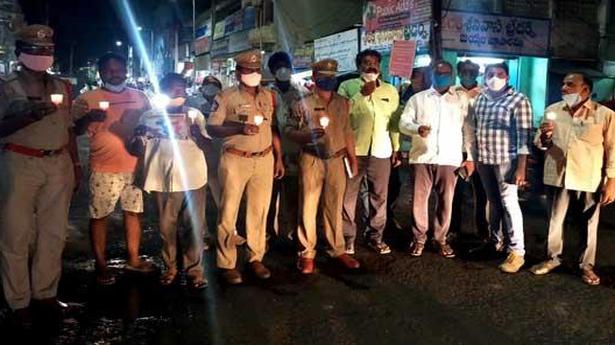 Several police personnel accompanied by villagers walked collectively in a candlelight rally right here on Monday night, marking their silent protest in opposition to the killing of COBRA jawans by Maoists in Bijapur-Sukma space of Chhattisgarh State on Saturday.

Two COBRA Battalion personnel from the State, recognized as Sakhamuri Murali Krishna of Guntur district and Routhu Jagadeesh of Vizianagaram district, had been among the many 22 deceased CRPF jawans within the encounter that occurred in Tarrem forests deep contained in the Maoist stronghold.

Murali Krishna and Jagadeesh, of the COBRA 210 Battalion, joined the CRPF a number of years in the past. They had been a part of the ill-fated operation through which over 400 heavily-armed Maoists encircled and attacked the combing celebration.

Police officers K.V. Ramana, P. Ravindra Babu and M. Keshava Rao participated within the rally accompanied by villagers. They raised slogans condemning the bloodshed of the Maoists, and paid tributes to the slain jawans.

In Krishna district, Superintendent of Police M. Ravindranath Babu and different officers paid homage to the jawans who laid down their lives within the line of obligation. In a gathering held at Machilipatnam on Monday, the SP and different officers condemned the bloodbath of the Maoists, through which 22 jawans misplaced their lives, moreover 32 jawans getting injured.

“It is unfair on the part of the Maoists, who claim to be fighting for the poor, to kill young jawans who were discharging their duty,” the cops mentioned.