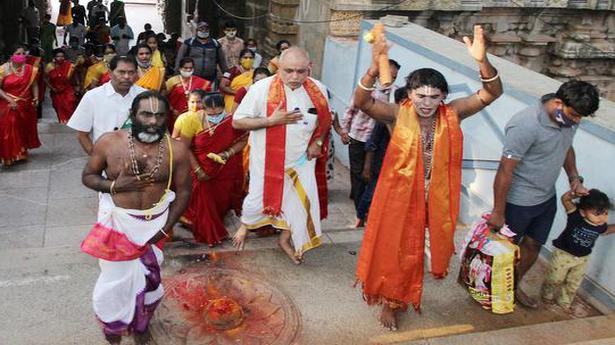 Devotees in giant numbers converged at Alipiri on Wednesday, to trek the flight of stairs main to Tirumala, marking the 518th loss of life anniversary of saint poet Tallapaka Annamacharya on April 8.

On the event, artists of the Tirumala Tirupati Devasthanams(TTD)’s Annamacharya Project introduced choose ‘Annamaiah Sankirtans’, whereas some, dressed up because the poet and mythological characters, gave a spell-binding efficiency.

The trek started at Padala Mandapam, with Hari Narayanacharyulu, a descendant of Annamacharya, performing Vedic rituals on the poet’s statue.

Annamacharya Project director S. Dakshinamurthy Sarma mentioned the TTD was taking steps to current the ‘sankirtans’, give a significant commentary and place them within the public area.

As Annamacharya is believed to have been initiated into Sri Vaishnavism by the primary seer of Sri Ahobila Mutt, its current pontiff Sri Ranganatha Yathindra Mahadesikan will take part in a particular occasion, to be performed by TTD on Tirumala hills on Thursday.