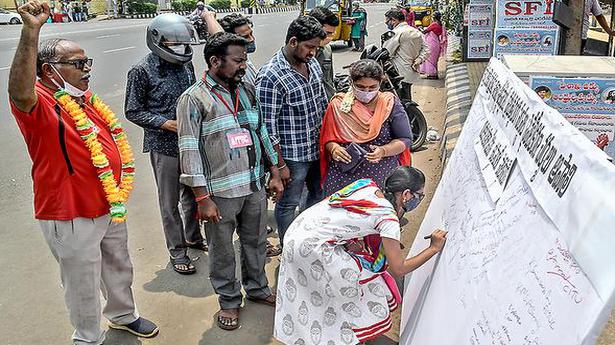 A signature campaign was organised by the All Trade Unions, People’s Organisations, Visakha Ukku Parirakshana Porata Committee on the bus shelter close to the Gandhi Statue Junction, close to GVMC, on Monday.

Centurion University Vice-Chancellor G.S.N. Raju, who launched the campaign by signing on the large banner, put up to oppose the privatisation on Visakhapatnam Steel Plant(VSP). He mentioned that PSUs have been established on lands sacrificed by farmers and with the taxes paid by the individuals. They have been strengthened by the contribution of workers. It was flawed on the a part of the Centre to privatise VSP, he mentioned and demanded fast reversal of its choice.

Political analyst Telakapalli Ravi formally launched the fourth day of the relay starvation strikes being organised by the committee. ‘Atma Nirbhar’ doesn’t imply promoting away PSUs to non-public entities. He recommended the individuals for his or her united wrestle towards privatisation of VSP.

IFTU State president P. Prasad mentioned that the goal for privatisation of PSUs, when the New Economic Policies, have been launched in 1991, was to full privatisation inside 10 years. It was extended to 30 years due to the relentless struggles and strikes by the working class.