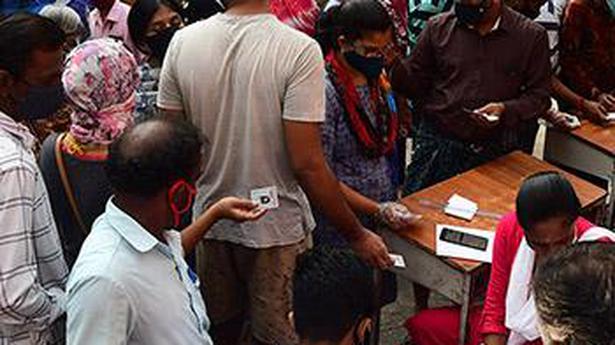 The Election Commission on Wednesday revised the voter turnout for the Assembly election to 72.78% from 71.79% after consolidating the figures on the shut of polling (7 p.m. on Tuesday).

Among the districts, Karur topped the chart with 83.92%. Among the constituencies, Palacode in Dharmapuri registered the best polling at 87.33%, adopted by Kulithalai at 86.15%, and Edappadi, from the place Chief Minister Edappadi K. Palaniswami contested at 85.6%. A complete of 37 of the 234 constituencies registered over 80%.

In Chennai, 13 constituencies registered lower than 60%, with Villivakkam coming on the backside of the desk for the State with 55.52%.

Karur, Ariyalur, Dharmapuri and Kallakurichi districts recorded greater than 80%. The Nilgiris, Ramanathapuram, Sivaganga, Coimbatore, Kanniyakumari, Chengalpattu and Tirunelveli registered 65.65%-69.68%. Chennai was the one district that recorded a turnout lesser than this, at 59.06%.

The Election Commission didn’t present a breakdown of the gender-wise polling figures.